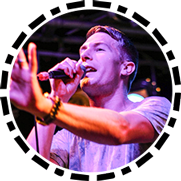 Perth hip-hop artist, Marksman Lloyd has been dubbed by Colosoul magazine as “the new poster boy for educated and progressive hip hop.” Performing since the age of 15 at local hip hop workshops, he spent his formative years on the freestyle battle circuit winning Scribble Jam Western Australia in 2006.

With a resume that now boasts shows in the U.S and Singapore, Marksman has shared the stage with international artists MACKLEMORE & RYAN LEWIS, BROTHER ALI, ACTION BRONSON, P-MONEY, DAVID DALLAS and Australian acts like DRAPHT, SETH SENTRY and ILLY. Marksman has crafted a style of music focused on changing the way we look at the world we live in. His unique approach to song writing, willingness to push the boundaries of hip hop and infectious live show make Marksman Lloyd an act not to be missed. After two successful EP’s and a national tour in 2013, Marksman is about to release his new EP ‘Rewrite the Ending’ on September 12, 2014. Check out the latest single ‘You Won’t Be The One’ featuring Whisky Winter, above.

For more information check out www.facebook.com/marksmanlloyd.