Adam Przytula has been involved with running sessions in schools for over 20 years.

His passion for helping teenagers and adults with mental health issues, come from his own lived experience. A difficult home life, parents divorcing at age 13 and being bullied every single day of high school life led Adam to have a suicide plan in place in the middle of Year 10. Barely passing Year 12 and realising he needed help and did not receive it – led Adam to volunteering in a team in 1998 at age 18 and then became coordinator of that team for 5 years – PHYSI (PowerHouse Youth Services Inc) which won a number of community awards during Adams coordination.

Adam graduated at the end of 2010 with a Secondary Teaching degree from Murdoch University while working as a chaplain in a School and in 2011 created Armed For Life – running sessions in schools to focus on helping students build resilience and deal with mental health issues.

In 2014 Armed For Life won the Telstra Australian Business Award in the Micro Business Categroy as well as a string of other awards in the 3 years since. Adam now runs Armed For Life full time with a team of speakers and performers running sessions and successful programs including the holistically based Overhaul Program with a qualified team of Nutritionists, Naturopaths, Psychologists and Personal Trainers.
Since inception, January 2012, Armed For Life has worked with over 225 schools and spoken to over 600,000 students.

Adam has been working with youth for 19 years in some capacity, and always has and always will have a passion for helping teenagers dealing with the same issues that he struggled with himself. It is this passion coupled with his sense of humour, complete honesty about his own experiences, and a strong element of vulnerability that causes students and teachers to engage so well with the sessions run. 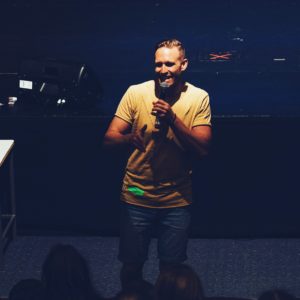